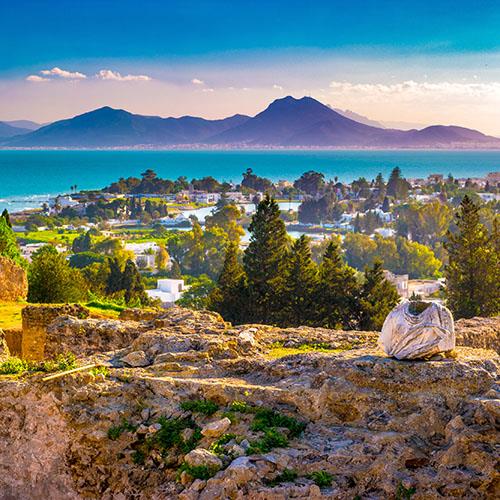 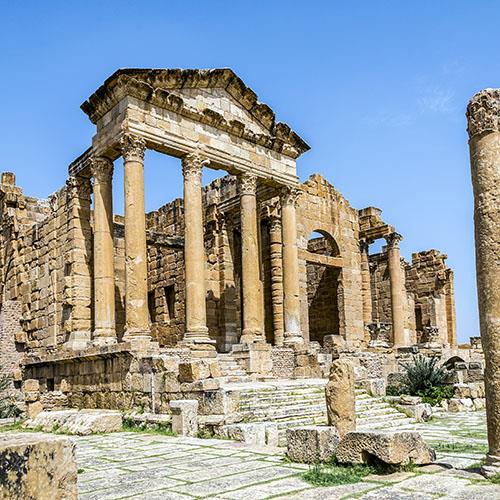 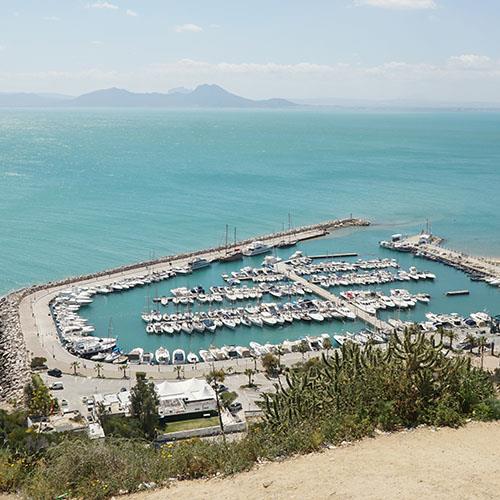 Carthage is an extensive archaeological site (and a UNESCO World Heritage Site) located on a hill dominating the Gulf of Tunis and the surrounding plain. This is an exceptional place of mixing, diffusion, and blossoming of several cultures that succeeded one another and a unique place of archaeological and cultural value. It houses ruins of great buildings, theaters, villas, baths, houses, and columns from the great Punic and Roman empires. Come to Cartage and be amazed by its breathtaking Mediterranean beauty, history, and undoubtedly immense cultural value.

Please note we do not offer hotels or other activities in this city at this time, but you can explore it by choosing it as an addition on one of the packages listed below.

More details
A perfect introduction of Tunisia! Visit Tunis (the sprawling capital of Tunisia, a country in North Africa, that sits along Lake Tunis, just inland from the Mediterranean Sea’s Gulf of Tunis), then, take a transfer to Hammamet (resort town, well known for its beaches with turquoise waters, its party atmosphere, its Medina and Great Mosque and the charming of its white houses and Marina) with a stop in Carthage and Uthina. After that, take two more transfers to Sousse (capital of the Sousse Governorate. Sousse is in the central-east of the country, on the Gulf of Hammamet, which is a part of the Mediterranean Sea) and Sfax (an important commercial and industrial centre, with modern industrial zones and an expanding population). Of course, make stops in Kairouan and Monastir to explore it’s fullest. This is a flexible vacation package. Select your number of nights in each city, desired hotel and activities.;
Included:
9 nights from $1,425*

Close more details
Soak up the sun on Tunisia`s endless coastline! . Start with a nice stay in its capital city, Tunis (with its Ancient Medina, its souks, the Ancient Carthage Ruins and the Amphitheater). After that, travel to south coast, to enjoy glorious summer days in Hammamet (resort town, well known for its beaches with turquoise waters, its party atmosphere; and great historical sites, like The Medina, the Great Mosque and the charming white houses near the Marina); and then, to Monastir (major tourist seaside resort in the north east coast between its Medina and Muslims buildings; with sandy beaches, palm trees, turquoise sea and a wide choice of water sports activities and golfing). Private transfers will take you between destinations, that will allow you to explore these following Roman Archaeological attractions: Carthage, Uthina and The Water Temple and one way transfer from hotel in Monastir to Tunis Airport. This is a flexible vacation package. Select your number of nights in each city, desired hotel and activities.;
Included:
7 nights from $1,192*