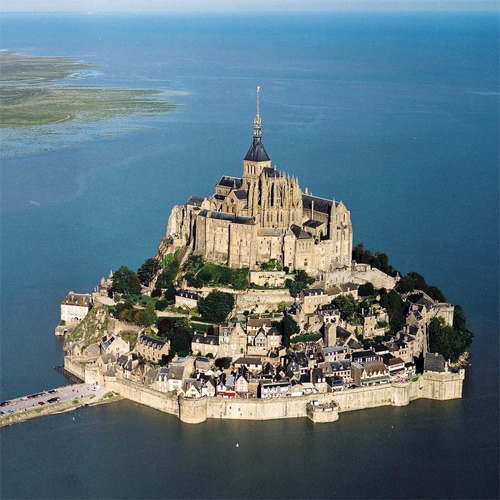 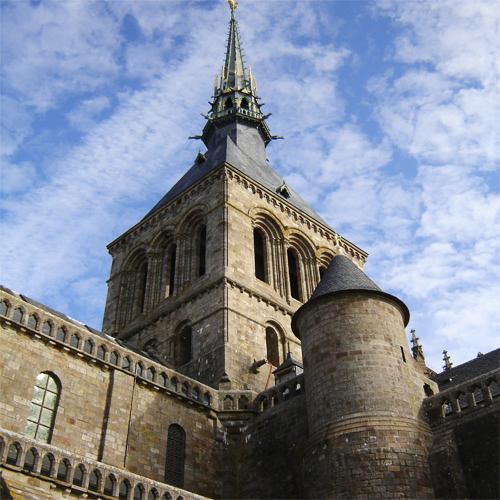 The island commune of Le Mont-Saint-Michel is situated less than a mile from the coast but cut off from mainland France at high tide, it has been occupied for over 1,000 years, being used for both religious and military purposes. Its unique position, beauty, and historic landmarks now attract over 3 million people a year.

The magnificent Abbey of Mont Saint Michel on the island is designated as a UNESCO World Heritage site and ranks high on the list of top attractions in Normandy. The abbey is perched on the highest point of the rocky islet in the Bay of Mont Saint Michel, while the island’s medieval village is surrounded by ancient defense walls. At high tide, Mont Saint-Michel appears from afar as a mystical island. At low tide, it is possible to walk around the island.

The city, though small, has to this day inhabitants - not many full time inhabitants - and a mayor, and in addition to its religious monuments, has old houses, narrow streets, hotels, restaurants and shops, all catering to the people who come to visit this magnificent site each year. Mont Saint Michel is the most visited tourist attraction in France, besides Paris, and it is easy to see why.

The legend goes that Archbishop Aubert of Avranches founded an abbey here back in 708 after the Archangel Michael appeared to him in a vision, marking this as an important place of pilgrimage. Mont Saint-Michel is full of wonder where visitors are dazzled by this exquisite Gothic landmark, a gem of medieval architecture, that presides over a scenic coastline. 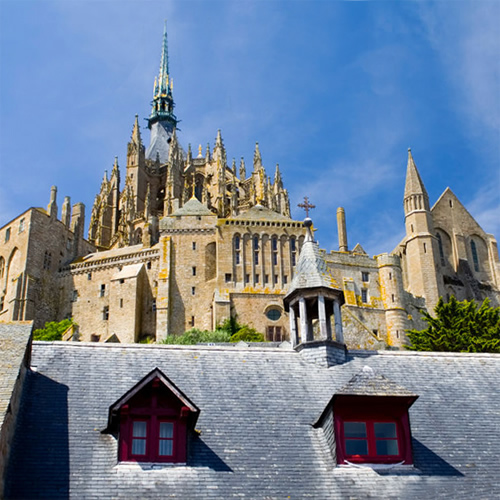 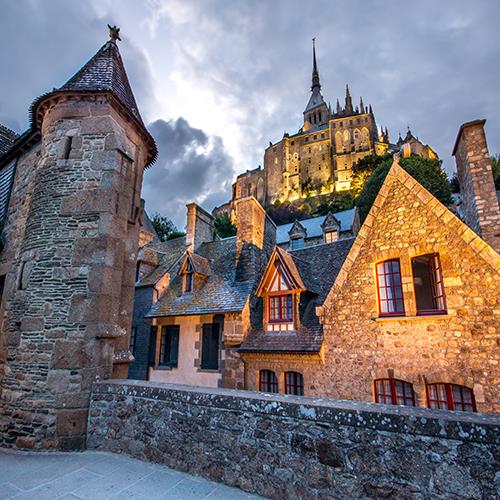 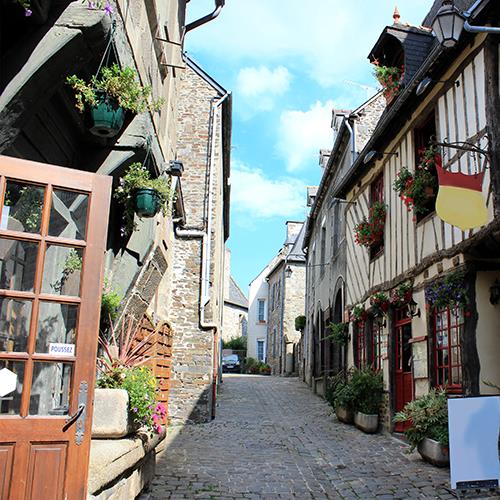 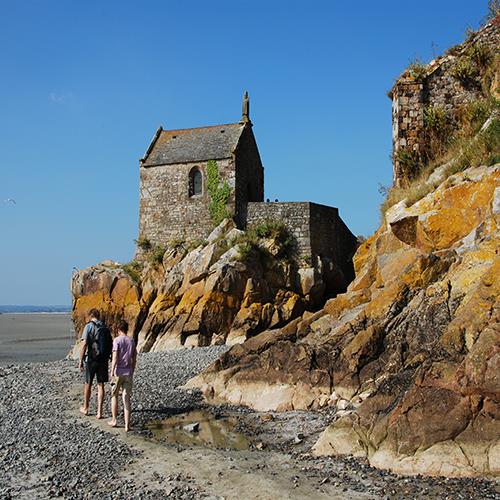 Things to see and do

Mont Saint Michel is steeped in history and it’s one of the most beautiful sites in all of France. Throw yourself back in Medieval times and do everything on the island while you’re there.

Pay a visit to the Abbey of Mont Saint-Michel, breathtaking in every right, with its Gothic spires reaching over 500 ft. above the sea. The highest part of the monument, known as "La Merveille" ("The Marvel"), is a masterpiece of medieval art. It is even more amazing when you consider the challenges of bringing building materials across the Bay of Saint-Michel.

The Abbey has been an important religious site since Antiquity, the Mount became a Christian sanctuary founded by Aubert, Bishop of Avranches. In spite of great technical challenges, the abbey was built between the 8th century (Carolingian period) and 16th centuries in various architectural styles. The buildings dating to the 13th century best express the serene ambience of the abbey.

Arrive at the Ramparts at the first two gates that provide access into the medieval village. Once you enter, you will be transformed to the world of the Middle Ages. The entire island is a pedestrian zone, and most of the stone buildings date from the 13th-16th centuries. Visitors can wander the Ramparts Pathway to enjoy the fabulous panorama views of the Bay of Saint Michel. Check out the Tour du Nord (North Tower) observation deck, a great place to watch the tide flow in and out of the Bay.

Stroll Grand Rue, the island’s only street that runs parallel to the ramparts, and takes visitors through the medieval village of Mont Saint Michel. The cobblestone street is lined with stone houses of the 15th and 16th centuries, which now house quaint shops, cafes, restaurants, and hotels. Also located on Grand Rue is the Eglise Saint-Pierre, a 15th-century parish church, and the History Museum, where visitors can learn about the historic prisons and monks’ lives of Mont Saint Michel.

The Museum of the Sea and Ecology, located on Grand Rue, offers great insight into the maritime world that surrounds Mont Saint Michel. Learn about the project to restore the maritime character of the area, as well as the environmental efforts of the Bay of Mont Saint Michel, which has the highest tides in Europe.

Another museum worth noting that sits along the Grand Rue is the Archeoscope museum, a unique attraction that presents a multimedia show about the construction and history of the Mont Saint Michel Abbey. Also worth noting is the Logis tiphaine, a 14th century home of Bertrand du Guesclin, a knight and constable of the King of France’s armies during the Hundred Years War. The historical house is now a museum that contains medieval furniture and artifacts.

Many companies provide guided walks across the bay of Mont St-Michel during low tide. Walks are done barefoot, and in shorts due to the muddy ground and potentially knee-high water. Walks are typically one-way, start at a beach such as Genets, and end after reaching the mount. Foot-washing stations are provided at the mount to clean muddy feet. Guided roundtrip walks starting from the mount are also available and typically last 3-4 hours. Most walks are conducted in French, so check carefully before booking. 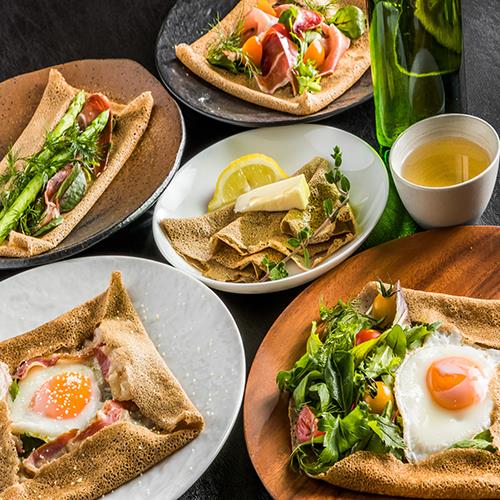 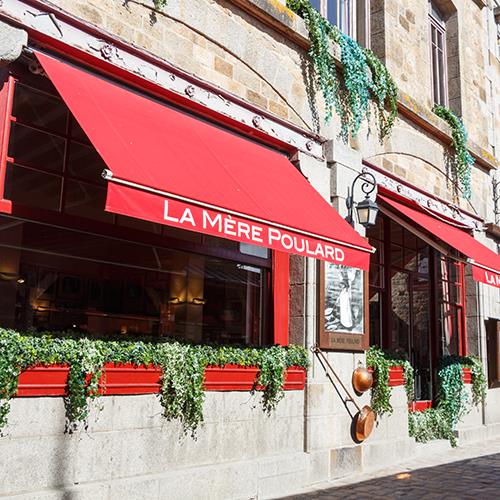 Whether you’re looking to enjoy a romantic evening of fine dining, a casual lunch or you just want a quick bite to eat, you can be sure to find it on and around the Mont Saint Michel eateries. From modern, creative cuisine to traditional regional specialties, there are plenty of options to choose from. The old town at the base of the abbey is where a wide selection of these restaurants, cafes, fast food, and other food venues are found. Keep in mind that no matter where you go, you’re likely to pay a premium for eating in the village. A packed picnic is a great option.

The culinary specialties of Mont Saint-Michel are omelets, whipped until frothy and light, and saltmarsh lamb (agneau de Pré Salé) dishes from the sheep that wander around the coast.

On the approach road to the mount is a small area of shops, restaurants and supermarkets, although not cheap, they are less un-reasonably priced than getting food on the island.

One of the highlighted restaurants in Mont Saint Michel is the La Mère Poulard. A Restaurant that has been operating since 1888, and over the years has accrued a vast number of autographed portraits from past diners. Famous faces like Ernest Hemingway and Yves Saint Laurent now fill the walls, a testament to the quality of the establishment. The restaurant serves culinary specialties such as the omelet, which is made from a secret recipe and cooked over an open fire, a technique pioneered by the restaurant founder, Annette Poulard herself. Also be sure to try the famous biscuits, a butter cookie made with the finest Normandy butter.

Mont Saint Michel has a number of shopping opportunities, although the majority of these are really little more than tacky souvenir gift shops.

The largest selection of shops and cafes on Mont Saint Michel are to be found lining the Grande Rue, and these are fine if you are simply looking for a nice postcard, T-shirt or souvenir. Visitors can also find additional shops on the approach road, which leads to Mont Saint Michel’s causeway. Although these shops are quite expensive, they are cheaper than the ones on Grande Rue on the island. 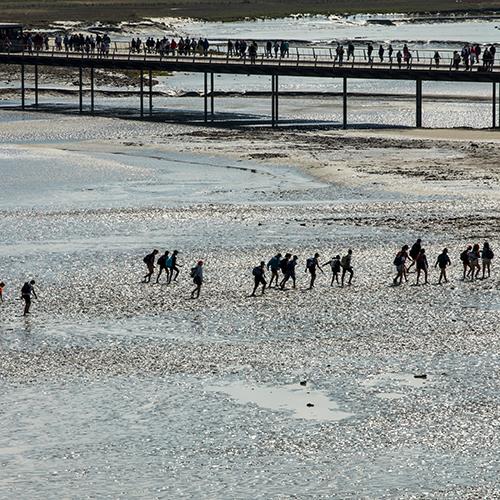 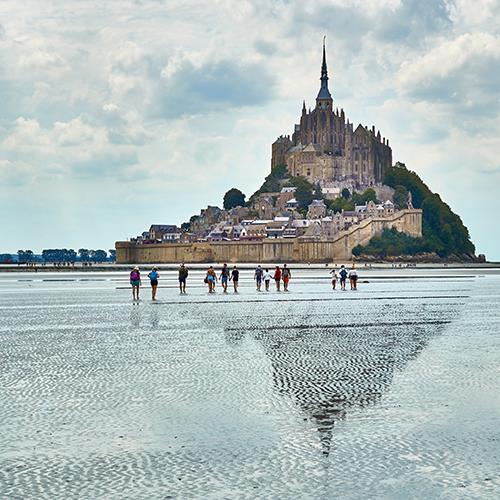 Christian pilgrims have made the strenuous journey to Mont Saint-Michel since the 8th century. Known as the "Wonder of the West," the Abbey of Mont Saint-Michel continues to be a sacred destination for modern-day pilgrims.

Over the centuries, pilgrims have completed the final stretch of their pilgrimage, the crossing of the Bay of Mont Saint-Michel, by foot. It's important to know that the bay has an extreme tidal range (9 miles in each direction). The high tide turns Mont Saint-Michel into an island for about one hour each day. At low tide, it is possible to walk across the bay's sandy basin.

Pilgrims can hire a licensed guide across the Bay of Mont Saint-Michel. The journey takes about two hours. For those who wish to get the full experience of medieval pilgrims, they can walk 9 miles from the village of Genets or the village of Vains to Mont Saint Michel. Licensed guides offer these pilgrimage routes.