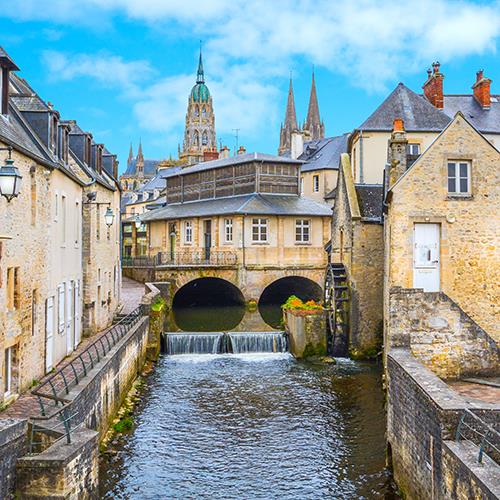 The medieval city of Bayeux is filled with charm. The city is linked to two famous cross-Channel invasions - The Norman conquest of England by William the Conqueror in 1066 and the Allied D-Day invasions. It was survived almost completely unscathed from the bombings of 1944 during the WW II Allied invasion of Normandy. It became well known as the first major town in mainland France to be liberated by the Allies in WWII. Before the war, the Bayeux Tapestry, nearly 250-ft of embroidered cloth depicting William the Conqueror and Harold II’s “battle of the throne,” served as the town’s claim to fame.

There are so many wonderful things to see and do in Bayeux, with a Gothic 11th century cathedral, cobblestone streets and a lovely main street with cafes, boutiques and cafes. Because it’s only 7 miles from the coast, Bayeux is the perfect home base for visiting the landing and battle sites. 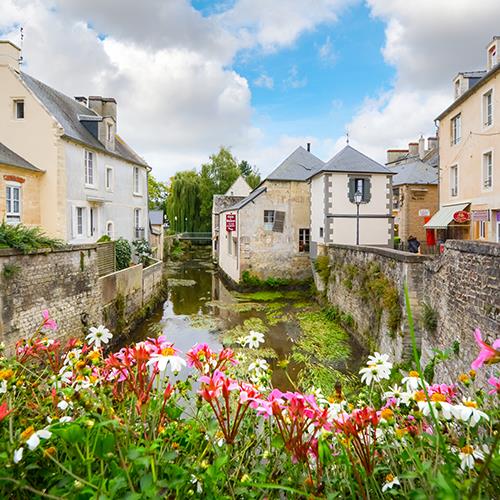 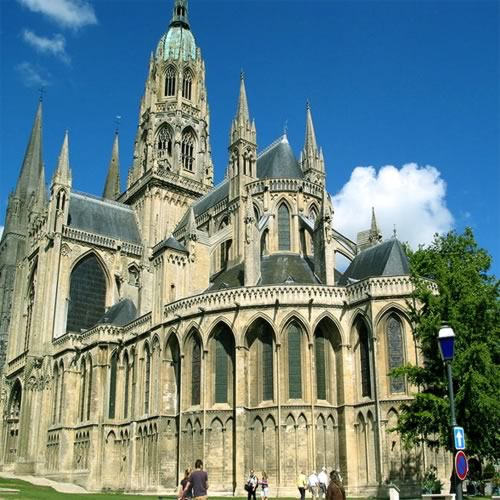 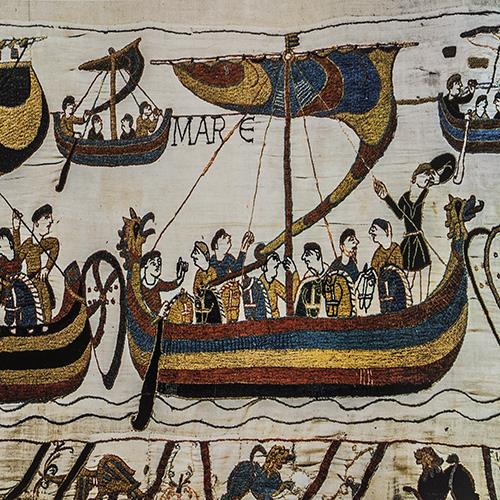 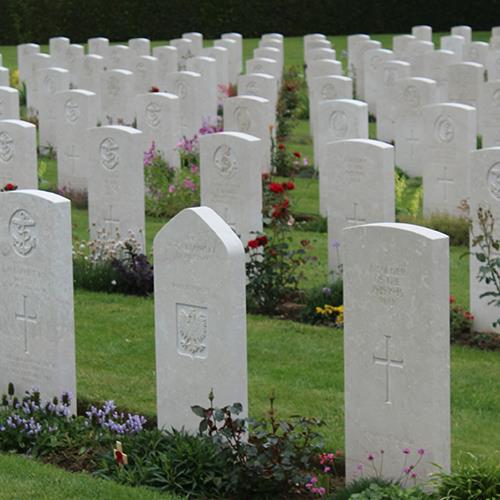 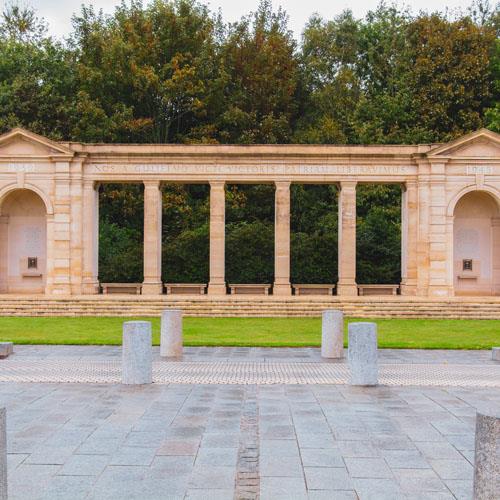 Things to See and Do

Pick up a map from the Bayeux tourism office and head out for a self-guided walking tour. Numbered, bronze-colored historical plaques, in English and French, mark key places around town.

Take a stroll through Bayeux Old town and admire the nostalgic charm. While so many of Normandy’s towns took a beating during the Second World War, Bayeux miraculously came out unscathed, the result of which is a stunning Old Town that the Aure river gently flows through. Be sure to keep an eye out for the historic waterwheel, a notable Bayeux landmark that makes an appearance in most photos taken of the city, and lends to Bayeux’s charm.

Take note of the Place Charles de Gaulle, a beautiful square in Old Town with a fountain at the center and several historical markers about the area. French general Charles de Gaulle spoke here on June 14, 1944, just a week after British forces entered Bayeux, the first major town in mainland France to be liberated.

Situated in the heart of Bayeux, the Notre-Dame Cathedral (also known as the Cathedral of Our Lady of Bayeux) is an architectural wonder. The building was originally constructed in Romanesque style. Gothic features came later on in the 15th century, after the church had endured damage during the 12th-century. Not only is the church impressive on the outside, the interior is just as exquisite with stained=glass windows and massive columns. Be sure to visit the crypt while inside and walk the entire perimeter when outside. There is a beautiful courtyard just next to the cathedral. The cathedral is also the original home of the Bayeux Tapestry.

If you are visiting Bayeux late November through December, the tourism office hosts a free “Tapestry of Bayeux” light show in the cathedral on Saturday evenings. This 30-minute digital show brings the tapestry to life with animation and narration. The show is in French, but if you visit the Bayeux Tapestry Museum beforehand, you will be able to follow along. It’s completely free, with no reservations necessary!

Retrace the Norman conquest of England at the Bayeux Tapestry. To preserve the tapestry, the curators keep it delicately hung up in a dim room in a museum. The impressive “tapestry,” which is really a hand-stitched embroidery using colored wool yarn, stretches 230 ft in length. Through detailed images and symbols, the cloth features the events leading up to the Battle of Hastings in 1066 and the Norman conquest of England. Pick up an audio guide to learn what each scene represents and to better understand the battle for the throne. After viewing the tapestry, which takes about 15-20 minutes, visit the second floor exhibits depicting life during that period and replicas of Viking armor and ships.

Discover the Bayeux War Cemetery, home to more than 4,600 burials of service people from WWII, it is the largest cemetery in France. While most of the soldiers buried here served the British, a few are from other countries, such as France, Poland, Russia and even Germany. Across the street is a memorial for unknown and missing British soldiers from the war.

The Bayeux Reporters Memorial is a touching tribute to journalists killed in military conflicts and/or related to their work. Rectangular stones line the garden’s walking path and list each journalist’s name and the year of their death.

The Memorial Museum of the Battle of Normandy is close to both the Bayeux War Cemetery and the Bayeux Reporters Memorial. The museum takes visitors through the months of Allied troop advancement into Normandy, from the initial invasion right through the victory. Displays include several military tanks from the Second World War outside with the description of their function and usage in both French and English. Uniforms and other army memorabilia, alsong with audio and visual aids are also on display. The museum is considered to be one of the best in the world for its showcase of the events of D-Day/Operation Overload.

Admire European art at the Baron Gérard Museum, housed in the former Episcopal Palace of the Bishop of Bayeux, the museum has been in existence since 1900. It features a fantastic collection of paintings, archaeological discoveries, and Bayeux porcelain and lace. One of the most notable paintings on display is Gustave Caillebotte’s 1876 piece, Portraits in the countryside, alongside works from other famous French painters such as Eugene Boudin, Camille Corot, François Boucher and more. 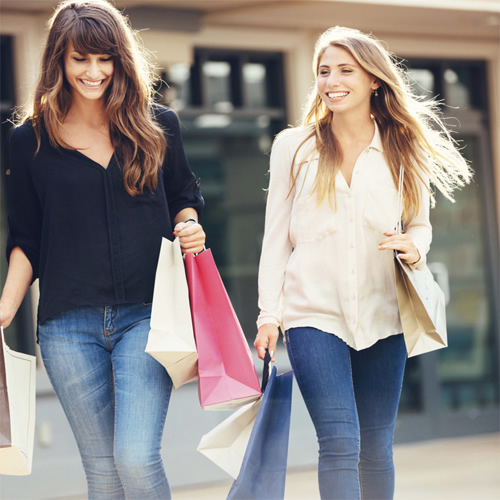 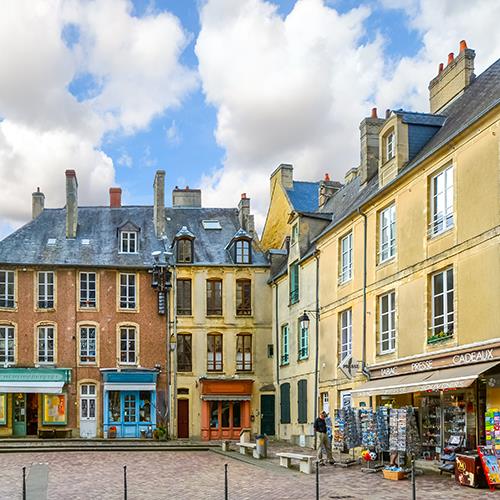 Bayeux’s weekly market takes place every Saturday morning in the Saint Patrice Square. Vendors of all kinds set up their stalls of fresh fruits and vegetables, seafood straight from the ocean, and other local Norman goods such as cider, Calvados (wine), and cheese. You can also enjoy delicious prepared foods as well such as pizzas, crêpes and choucroute de la mer, which is a medley of seafood on a sauerkraut base.

Shopping in Bayeux offers a combination of French authenticity and touristic trinkets. Shops toward centreville (the downtown center) tend to be more overpriced than some of their counterparts about 3 km (1.8 mi) north. Rue Saint Malo-Rue Saint Martin are excellent streets for shopping. Here you’ll find all kinds of shops. Rue des Cuisiniers is also a nice street for handicrafts and restaurants.

The shops on St. Jean offer many of the typical tourist shops, but also features high quality stores with antiques. If you are looking for art, head to Place aux Pommes where there are artist workshops featuring many different types of work.

Shopping for gastronomic pleasures is usually a goal while in France as well and you will have no difficulty accomplishing that at the local food stores and city markets.

Shoppers should make note that many stores close for the lunch period which is usually from around noon to 2pm. Also, as with most stores in France, shopping on Monday is not a good idea, many stores remain closed. 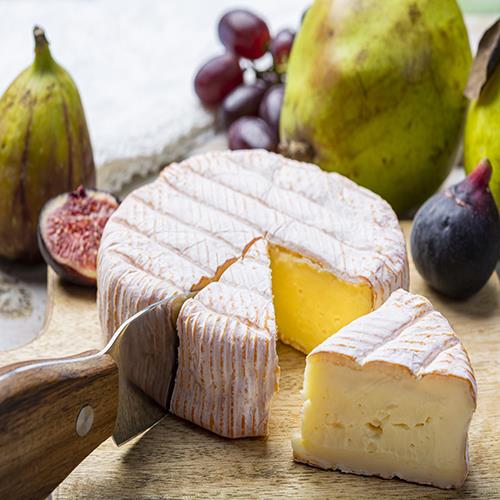 One of many reasons to stay in Bayeux is the fantastic restaurants and cafes in town. You’ll be spoilt for choices from regional, national and even some international cuisine. Be sure to try food and beverages produced in the Normandy region. This includes calvados (which is similar to brandy), cider, stinky soft cheeses (such as camembert) and shellfish. Many dishes incorporate apples as well. 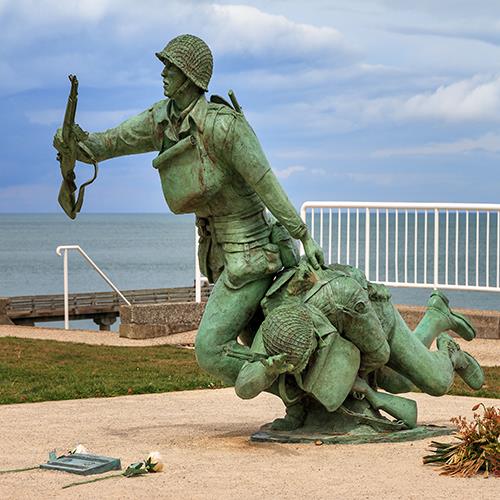 Bayeux France is a gateway for a visit to the D-Day beaches, driving, train and bus are all options to get there. A 20 minute trip will bring you to the five beaches that the allied forces landed on June 6th 1944. The experience of seeing these beaches is beyond moving. The beaches of Juno, Gold, Utah and Sword together with Omaha make up the 5 D-Day Landings locations.

Just 10 mins drive outside of Bayeux France lies Lounges-Sur-Mer – a coastal area that contains some of the imposing batteries that make up the Nazi built Atlantic wall which stretches a staggering 800 miles along the coast of Europe and Scandinavia.

Just an hour and a half from Bayeux, France lies the famous and completely magical Mont St Michel, which we would highly recommend adding to your itinerary if time allows. Just on from Mont St Michel is the beautiful port town of St Malo, a lovely town to explore.