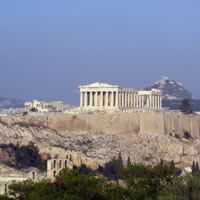 Makrigianni is an upscale neighborhood at the southern base of theAcropolis, and one of the most picturesque neighborhoods in Athens. Thelong pedestrian street Apostolou Pavlou passes in front of theAcropolis, Herodeion Theatre, the New Acropolis Museum and finallyreaches the Hadrian Arch. The small square where the statue ofMakrigiannis lies, the hero of the Greek Revolution, is found at thebeginning of this street in a small round square. Its architecturalbeauty and its historical significance make this quarter popular amongtourists and a favorite spot for Athenians to stroll around on a Sundaymorning. The most famous sights in Athens are found within walkingdistance from the Acropolis. Neoclassical buildings line the pedestrianstreet that house many institutions, galleries or embassies. Manytaverns, cafeterias and gift shops are available. Stay here if you wantto be as centrally located, but a bit out of the tourist crowds. Itborders with the picturesque neighborhood of Plaka from one side andthe region of Koukaki on the other. 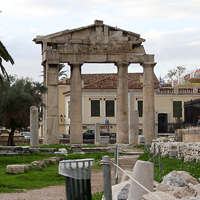 Right below the Acropolis, Plaka is the most tourist heavy neighborhood in the city. Its maze of narrow streets, which have been inhabited for more than 5,000 years, twist their way through ancient sites, Byzantine churches, offbeat museums, and 19th century homes. Restaurants and cafes line many streets of this pedestrian neighborhood that is rich in history and character and is atmospheric, romantic, and nostalgia inducing. Also tucked away along Plaka's winding streets are popular sites like the 4th century Lysicrates Monument, the Roman Agora, the Museum of Greek Folk Art, the Tower of the Winds, the Temple of Zeus, the Acropolis and the Herodes Atticus. However, the most beautiful part of Plaka is definitely the settlement of Anafiotika with pretty Cycladic houses leading to the Acropolis. Feel free to lose yourself in the labyrinthine streets. The Plaka is found between Syntagma and Monastriraki and is easily accessed on foot from the center of Athens. 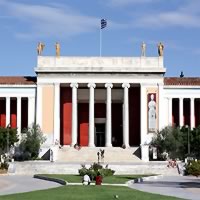 Aristocratic and elegant, this neighborhood, tucked beneath the slopes of Lycabettus Mountain, has long been the favorite address of the socialites. The streets (many pedestrian) are packed with boutiques, designer houses, art galleries, and restaurants and cafes. Vassilissis Sofias Avenue, which branches off at Syntagma Square's northeastern corner is known as Museum Mile because of the large number of world-class museums such as the National Art Gallery, the Byzantine Museum, which showcases artifacts from medieval Greece, and the Benaki Museum, which features artifacts highlighting thousands of years of Greek history. Be sure to enjoy a stroll around in the streets of Kolonaki, and then have a coffee in one of the cafes in the beautiful pedestrian areas. Then make your way to the top of Lycabettus Mountain for an extraordinary sunset with Athens laid under your feet like a sparkling map. If you walk down, you'll pass through some of central Athens' nicest and greenest streets winding around Likavitos' lower slopes.

There are several open air markets and picturesque restaurants that stay close to the Greek tradition offering a charming atmosphere. The area is located between Lycavittus and Syntagma square. Kolonaki gradually merges to the northwest with the university area, which is spread loosely between the 19th century university buildings (the Neoclassical University Complex, or Trilogy) on Panepistimiou and the Polytechnic some ten blocks to the northwest. 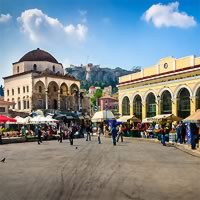 Northwest of Plaka along the base of the Acropolis, Monastiraki fringes the Agora and the Roman Forum, and is popular for its flea market even on non-market days. Monastiraki is one of the most picturesque neighborhoods of Athens with narrow streets and alleys crossing each other and occupied by numerous shops and street vendors. Many tavernas, cafes, and shops line the streets. Beautiful Adrianou street links Monastiraki to delightfully restored Thissio, with restored houses as restaurants and cafes on one side, the Agora on the other and Acropolis views as well. Athinas Street links Omonia and Monastiraki squares, and has Athens' Central Market. Here you can browse fish and meat halls, buy vegetables and fruit from all over Greece, sample cheeses from distant islands or buy a pair of shoes or sunglasses from a street vendor. Across from the markets, Varvakeios Square is now landscaped, has several cafes, and offers an opportunity to take a break from the frenzy of the market. Another nearby square, Klaftmonos has been redesigned and from it you can see the Neoclassical University Trilogy, another glimpse at grand and elegant 19th century Athens. The central square of Monastiraki, with a metro station very close, is a favorite hang out for the young crowd, who perch on the steps, the fountain, and many open air happenings take place here. The neighborhood is home to Athens' last remaining mosque (from Turkish times), Hadrian's Library, the Roman Agora and Tower of the Winds. 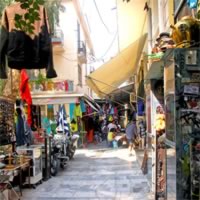 Just a short stroll northwest from Monastiraki, Psiri has become one of the most popular neighborhoods in Athens among younger travelers. Between Athinas and Ermou, Psiri is one of the city's hottest destinations after dark. Slick warehouse conversions, restored neoclassical houses, trendy restaurants, bars, cafes, tavernas, and mezedopoleia (establishments offering 'small plates') with live music, clubs, and galleries side by side as well as some remaining workshops and dilapidated buildings, this area comes alive in the late afternoon until the early morning hours, even though its outer pockets remain a bit gritty. The heart of Psiri is Plateia Iroon, surrounded by interesting shops, unusual restaurants, and small churches. At night, Psiri offers a lively music scene. The Thisio and Monastiraki metro stations are most convenient to Psiri. 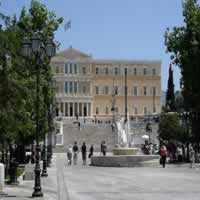 The neighborhood of Syntagma is built around Syntagma Square, one of the most important squares in Athens; it is constantly crowded with locals and tourists alike. Syntagma Square is the hub of public transportation in the city; buses, trolleys, trams, and the metro all stop here. The square boasts a central fountain, a number of statues and two grassy areas with lots of trees, perfect for relaxing in the shade.

The main attraction at Syntagma Square is the House of Parliament situated on its upper side of the square and surrounded by other large structures, such as the exclusive Hotel Grande Bretagne. Designed and constructed in the early 19th century, the Palace square, as it was known, was one of the city`s two main squares along with Omonoia. Today, Syntagma Square continues to be the stage for demonstrations and political rallies and serves not only as a destination for travelers and tourists, but also a meeting point for locals.

As the epicenter of the city, Syntagma is close to many attractions, such as the National Garden, the Arch of Hadrian, Plaka, the Acropolis, the Temple of Olympian Zeus, the Panathenaic Stadium – the marble stadium built in the 6th century BC – and the charming neighborhood of Plaka. It is also the starting point of Ermou street, a pedestrian High Street connecting Syntagma to Monastiraki square. 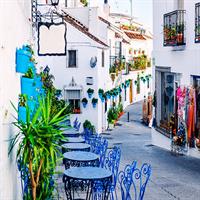 Nestled in the shadow of the Acropolis and more famous districts like Plaka, lies one of the city`s most creative and charming corners with an urban village feel. It is an unassuming neighborhood that had captured the attention of Athenians and visitors alike with a lot to offer for those who like to venture a little further from the historic center. Koukaki is popular amongst visitors as an Airbnb destination, ranking in the top five most interesting neighborhoods in the world to stay. You will also find many establishments inspired by cultures from around the world that present a taste of Greece blended with international styles.

Perhaps the most charming area in the neighborhood is the pedestrian zone running from Koukaki Square along Georgaki Olympiou Street. Overhanging trees, including palms, entirely conceal the concrete facades of the buildings above the cafés and restaurants. Instead, fairy lights and glowing lanterns create an atmospheric charm. Brightly painted wood and wicker chairs adorn the pavements where Athenians young and old come to socialize. Koukaki also has plenty to offer when it comes to shopping, although what it has to offer is more in the realm of small boutique shops that specialize in trinkets and unusual designs. The area creates an eclectic mix for every mood and style. 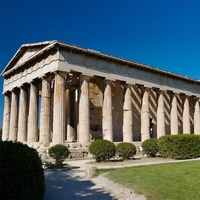 The central Athens neighborhood of Thission is full of cafes, bars and more nightlife crammed into just a few blocks. This area is within an easy walking distance of the Plaka and borders Monastiraki and Koukaki. Named after the well-preserved Thission (ancient temple of Hephaestus), Thissio is blessed with a small wooded park and some less busy streets that offer numerous quieter places to stay and eat. Largely pedestrianized Apostolou Pavlou Street runs between the Acropolis and forested Filopappou Hill, well worth climbing for more great panoramas, until it merges with Dionysiou Areopagitou Street. This leads to the up-and-coming area of Makriyanni, whose centerpiece is the magnificent new Acropolis Museum. Opposite the museum is the entrance to the southern slopes of the Acropolis, while the eponymous metro station nearby is at the top of Makriyanni Street, another strip of touristic cafés and restaurants.

A popular attraction in Thission is the Herakleidon Museum of Art, one of the most interesting gallery-museums in Athens. This museum founded by Mr. Paul Firos and his wife Anna-Belinda, collectors and art lovers, is in a beautiful old building, built in 1898, that hosts a permanent exhibition as well as exhibitions of work by Greek and foreign artists. 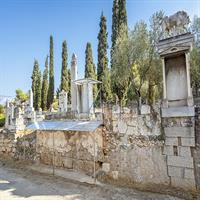 Gazi is only a 15- minute walk from the Thisseio metro station. It includes the archeological site of Kerameikos and the old Gas factory, from which the area took its name. This neighborhood is one of the liveliest of the city, and a prime area for nightlife. Here you will encounter countless choices from bars, clubs, theatres and unique terraces with a view to the Acropolis. In recent years, the nearby area of Kerameikos has also evolved into an entertainment destination, since new taverns, restaurants and bars are added in interesting yards and well hidden terraces.

Further west, you can visit the peaceful ancient cemetery of Keramikos, then cross busy Pireos Street to find yourself in Gazi. With the huge Technopolis performance and art complex converted from old gasworks at its heart, you really have to come at night to appreciate this maze of bars at its best, although a daytime stroll will allow you to admire the excellent street art. 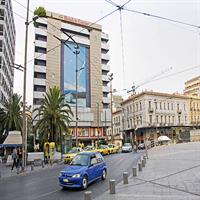 The Omonoia square has changed quite a bit in the year but still retains its purpose. It is the center of Athens and a place where you will find infinite coffee, restaurants and shopping. The areas atmosphere is relatively plain, surrounded largely by functional blocks from the 1950`s and 60`s, it is now mostly frequented by immigrants and bargain shoppers. The most rewarding area to explore in this neighborhood lies in the south. Set off down Athinas Street, you will get a sense of old commercial Athens, especially at the picturesque meat, fish and vegetable markets some way beyond the city Hall. The blocks to the west of Athinas are home to many Chinese and South Asian traders, adding a multicultural ambiance. It recent years, it has experience some urban decay, especially in the western part of Omonia. Despite this, it is still a focal point for commercial and social life in Athens.