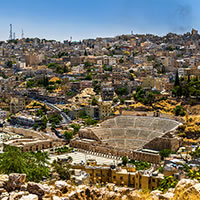 The City Center or Downtown Amman is known as `Al-Balad` in Arabic, is the oldest commercial area of the city. The area still has plenty of old charm to it where the city`s best `souks` are located and other major attractions in the ancient city. Tourist attractions in downtown include some of the best museums, ancient ruins, monuments and cultural sites. The Amman Citadel is situated atop of one of the seven hills of Amman, along with the Umayyad Palace and the Hashemite Plaza. Jabal Amman is where the famed Rainbow Street is located where cobblestoned streets are lined with cafes and shops. In the heart of the city is where plenty of hotels can be found along with modern-buildings and skyscrapers, fancy restaurants and quaint boutiques. The magnificent Roman Amphitheatre is located in downtown and is often the host of many live concerts and theatres; the Jordan Folklore Museum is also located within the theatre.