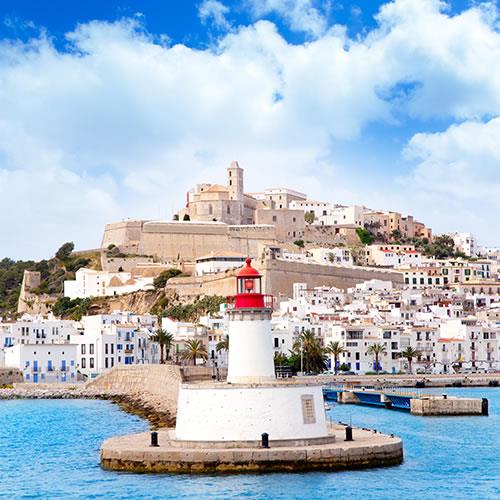 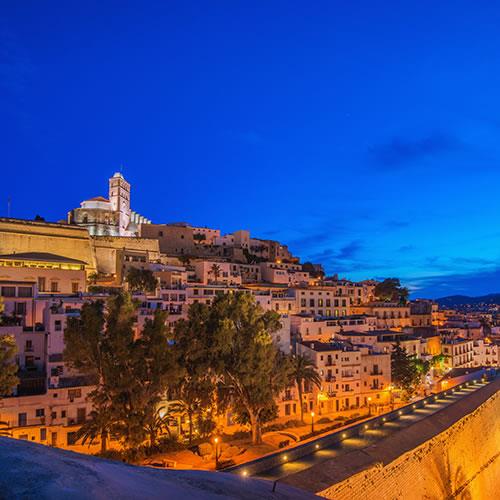 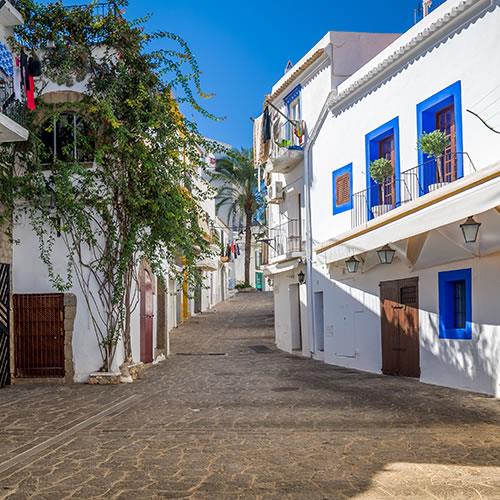 Ibiza Town (Eivissa in Catalan, pop. 49,000) is the capital of Ibiza Island and the largest city on the island. The core of the city is sandwiched between Figueretes and Platja d`en Bossa to the south and the Botafoc and Eivissa Nova marinas to the northeast. The Old Town, built on a mountain overlooking the sea, is called Dalt Vila and has been recognized as a UNESCO World Heritage Zone for over 20 years.

Ibiza Town was founded by the Phoenicians in the year 654 BCE, and the initial settlers called the settlement Iboshim. The Carthaginians expanded the city away from the port and began to settle more of the mountain above the port, beginning in the fourth century BCE. After the fall of Carthage in the second century BCE, it flourished even more, first as an autonomous settlement, and then a Roman city (named Ebusus). The walls around Dalt Vila were built by King Philip II in the second half of the sixteenth century CE. In the twentieth century, tourism exploded in the 1960s as it became well-known in the hippie movement. By the 1990s, it became a worldwide epicenter of `club culture`, and today some of the most exclusive nightclubs in the world are located on Ibiza Island (including a handful in Ibiza Town).

Dalt Vila (literally `the upper town`) still boasts its old fortified `city wall` system, and inside the walls you can see such sights as Ibiza Cathedral (the Cathedral of Santa Maria d`Eivissa), and the Carthaginian necropolis Puig des Molins. The area to the north of Dalt Vila and the Via Romana is called Eixample (the `extension` of the city of Ibiza, which was once just Dalt Vila). While other areas of the island might be better-known for its nightlife, one of the most popular clubs on the island, Pacha, is located in Ibiza Town, just north of the Casino de Ibiza in the Talamanca neighborhood. 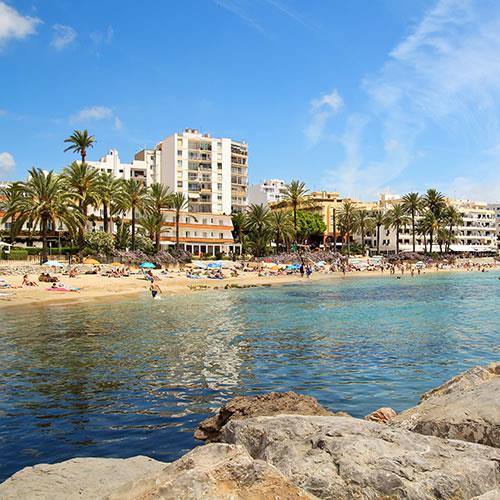 Figueretes is located a mile southwest of Ibiza Town`s Dalt Vila (Old Town), and is the closest beach to Ibiza Town. Figueretes Beach`s northern portion consists of shallow, mostly-clear waters with a palm-tree-lined promenade, the Passeig ses Pitiuses, separating the beach from resorts, apartments, restaurants, and bars. The promenade`s extensive renovation project was completed in June 2019. The beach`s rock jetties are popular recreational fishing spots. Past the southernmost of the three rock jetties on Figueretes Beach, there are a number of all-inclusive resorts offering private beach access to their guests. There are many resorts sandwiched between the beach and waterfront area and the Avinguda de Sant Jordi which runs parallel to the beach approximately 700 feet away. 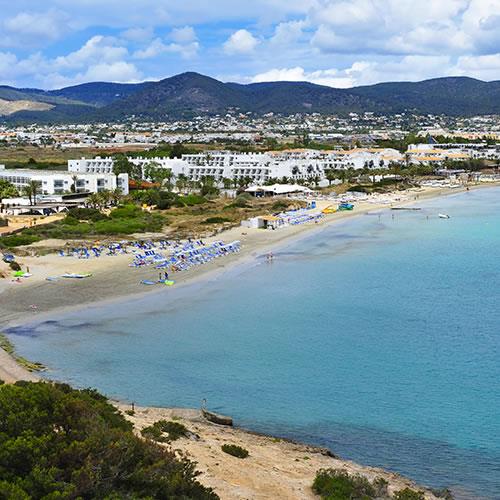 South of Figueretes by about two miles, the Platja d`en Bossa stretches for two more miles (the largest uninterrupted stretch of beach on Ibiza Island). Platja d`en Bossa is well-known for being one of the nightlife hubs in Ibiza. It has long been a favorite for young tourists traveling on their own, and there are accommodations for every price point. At one end of the beach you will find a little fishing cove called the Punta d`Abaix, and on the southern end of the beach you will see the 16th-century Torre de sa Sal Rossa, a defensive tower meant to protect the island from invaders.

The main street, one block off the beach, is the Carretera de Platja d`en Bossa, and on this street as well as the beach, you will find some of Ibiza`s hottest bars and nightclubs, including resorts which revolve around some of these clubs. Just off to the north of the Carretera is a water park, Aguamar. 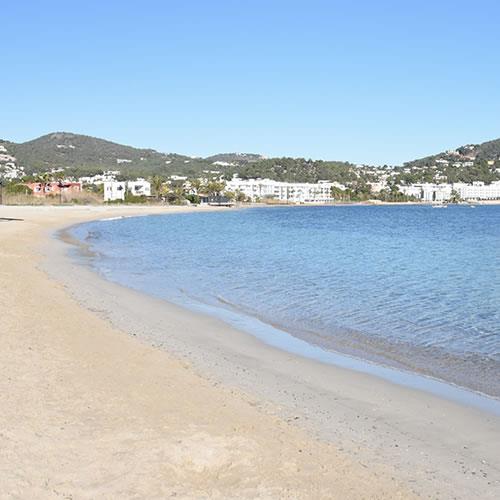 To the north of Ibiza Town`s passenger port, cruise port, and yachting clubs, sits the neighborhood of Talamanca. Taking the Avinguda de Santa Eulària des Riu to the Avinguda 8 d`Agost will take you to Talamanca. Drive past the marina and Ibiza Casino and you will reach Platja de Talamanca. The long beach in Talamanca is one of the most spacious on the island and even during high season you will find a spot on the sand. There are accommodations on the western side of the beach, closer to the marina, and to the eastern side, in an area called Cap Martinet. This is a resort area that can be very opulent if you have the budget for it, and it is more popular with single travelers than with families. 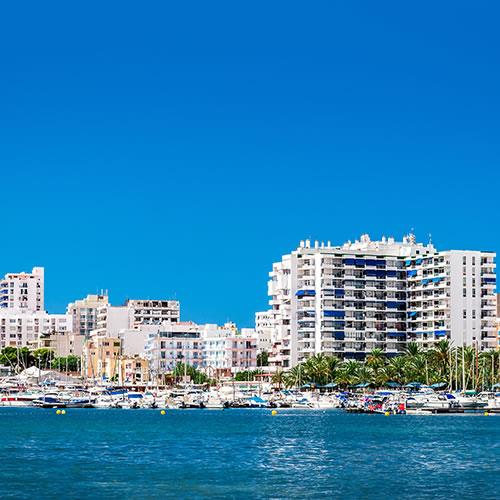 Sant Antoni de Portmany (also called San Antonio, its Spanish name) is considered one of the most popular nightlife hubs on Ibiza Island, and by extension, all of the Mediterranean. It is also well-known for its restaurants, patronized by both visitors and locals alike. It is located on the western coast, nine miles from Ibiza Town, accessible from Ibiza Town via the C-731 motorway.

Sant Antoni de Portmany (pop. 22,400) is the second-largest city on the island and is relatively compact, built in an area just a third of a square mile in size, located just to the north of the gulf called the Punta des Molí. The marina is one of the largest on the island, welcoming private yachts as well as ferries to the mainland of Spain (with destinations including Barcelona and Dénia). The nightlife can be found all over the city, but is particularly clustered east of the marina along Avinguda del Doctor Fleming, and along the Passeig de Ponent northwest of the marina, in an area called the `Sunset Strip.` It`s said that anyone who goes to Ibiza should enjoy the beautiful sunsets while sipping a drink at one of the `sunset bars`. The beach on the northwestern edge of town, north of the Sunset Strip, is called Calo des Moro. The beach along the eastern edge of the gulf, south and east from the marina, is called S`Arenal, and along the southern portion there are S`Estanyol and Cala Pinet beaches. 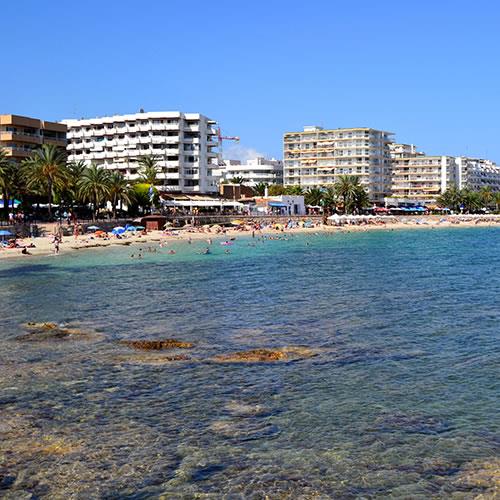 Santa Eulària des Riu (Santa Eulalia del Río in Spanish) is Ibiza`s third-largest city and is accessible from Ibiza Town (a nine-mile drive) via the E-20, E-10 and PM-810 motorways. The state-of-the-art yacht marina sits on the southeastern coastal area of the city, while the main beach, the Platja de Santa Eulària, is located less than 500 feet away from the edge of the marina. The main tree-lined road which runs for a quarter mile up to the beach, Passeig de s`Alamera, terminates at a promenade which stretches for the entire length of the beach and is home to a number of bars, nightclubs, and restaurants. Halfway to the beach, along the Passeig de s`Alamera, you will cross the main street in the city, the Carrer de Sant Jaume.

The beach ends at the mouth of the Santa Eulària River, the only river that flows on the island. Accommodation options can be found near the beach, to the east of the port (near the coves of Es Farallo and Sa Caleta), and to the south and west of Platja de Santa Eulària, in the Puig de Missa and Siesta neighborhoods (the former being situated north of the river, and the latter to the south). 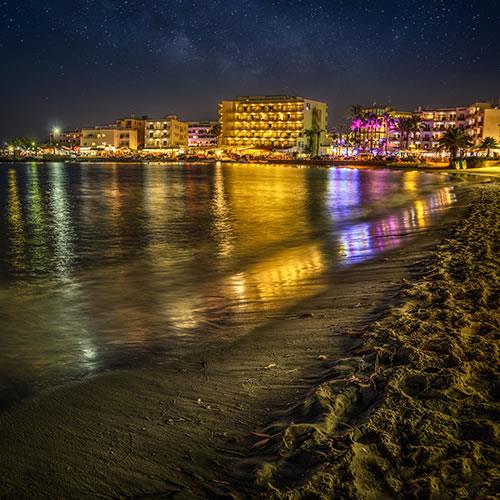 Es Canar is situated 2.5 miles northeast of Santa Eulària des Riu, accessible from Carrer de Cèsar Puget Riquer, which becomes Camí des Canar. It is particularly suited for the single traveler, who will love the resort hotels and apartment rentals which are located right on the beach. Pine trees flank Es Canar`s beach, which is a perfect place to do everything from jet skiing to windsurfing to simply relaxing on the beach. The nightlife in Es Canar offers a great variety of options, ranging from rowdy bars to chic ultra-lounges. The world-renowned music-and-dining venue Nikki Beach Ibiza is located to the south of Es Canar. 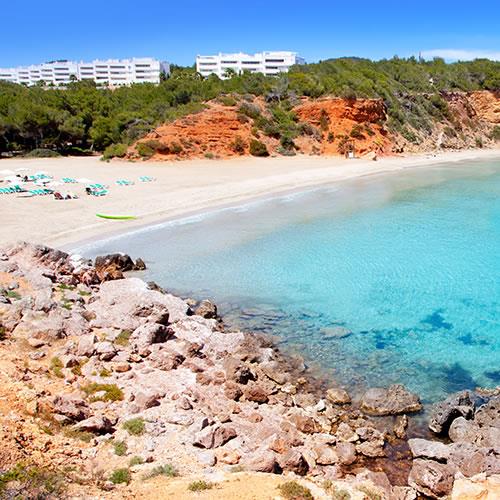 If you want to be close to action yet you still want a secluded beach getaway, consider staying in Cala Llenya, only 2.5 miles away by road from Es Canar. Compared to Es Canar, Cala Llenya does see more families at its resorts and the local beach, which offers white sands and shallow waters for children to wade and play in. Once you reach the beach, you will orient yourself by noting the apartments and resorts past the western side of the beach. There is a small bar and restaurant just off the beach which serves paella (if you want to try it, order it when you arrive at the beach because it takes a while to cook). 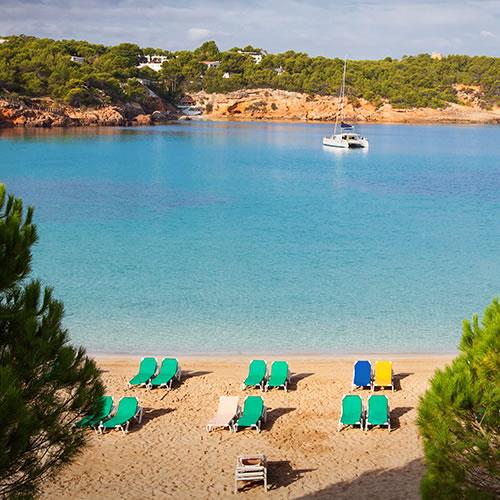 Portinatx is the northernmost resort town on Ibiza Island, and the accommodation options are clustered around its three beaches. S`Arenal Gros is the largest one, with S`Arenal Petit just to the west and Puerto Playa a half-mile to the north near the cruise port and the headland called Punta Galera. It is a wonderful resort for families, as the waters are crystal clear and shallow, allowing children to enjoy a number of water activities such as snorkeling. You will find most nightlife and food options clustered to the northwest of S`Arenal Gros Beach and in between S`Arenal Gros and S`Arenal Petit Beaches. The movie adaptation of the Rodgers and Hammerstein musical South Pacific (1958) was filmed in and around Portinatx. 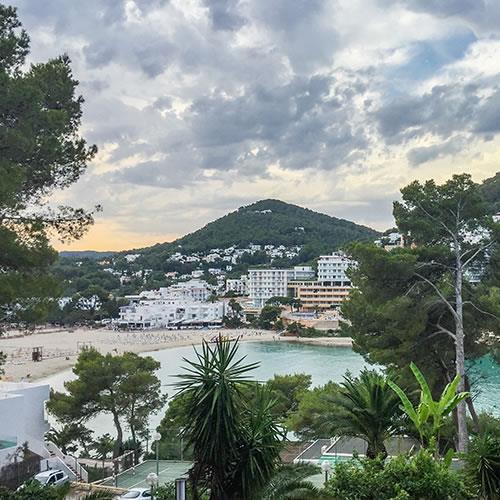 Out of all the resort towns on Ibiza Island, Cala Llonga is the one that comes most recommended for travelers with children. Cala Llonga`s main beach is very large, accommodating all types of sunbathers, with families comprising a majority of the visitors. There is a play area on one side of the beach, which includes a small amusement park, and then on the back end of the beach there is a row of cafes, restaurants and snack bars that are family-friendly. For the single traveler, the nearby beach of Sol d`en Serra is home to the famous beach club Amante Ibiza, which is three stories and built into a cliffside. The nightlife scene is muted in Cala Llonga compared to other cities, but the bars that are hopping in the area specialize in presenting live music acts to entertain their clientele. Check out the promenade during the summer, where there is a mini-market offering souvenirs for purchase each Thursday evening.