Relatively uncrowded between Florence and Pisa - Towns with true architectural beauty and charm: mazes of narrow streets, Romanesque churches and beyond them stretches a land of genteel spas such as Montecatini Terme.
Pisa

Map of Point of interest
Regions of Italy 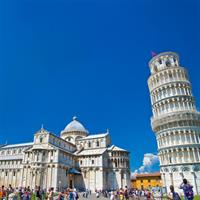 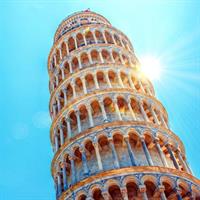 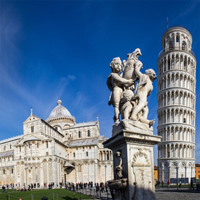 Best known for the world famous Leaning Tower, Pisa also offers other architectural and artistic marvels of this beautiful city. Around the Campo dei Miracoli`s perimeter you`ll also find the Camposanto, Opera del Duomo museum and Museum of the Sinopie. A few blocks away, the Piazza dei Cavalieri once was the heart of power in the city and later the headquarters of the Knights of St. Stephen. Today, it is a center of culture and learning as the famous Scuola Normale di Pisa has its base in the Palazzo della Carovana that faces onto the piazza. Birthplace of the famed Galileo Galilei, Pisa is also home to one of Italy’s top universities. The city is animated by the students, who organize parties, shows, and cultural events, and fill the central street of the city at night. The University of Pisa has 60,000 students in a city of about 100,000 inhabitants. Few bother to find out that Pisa was founded circa 1000 b.c. and became an important maritime republic alongside Venice, Amalfi, and Genoa.

More details
The Tuscan region of Italy is extremely famous, for its sunshine, friendly people, stunning vistas, food and wine. Explore the absolute best of this area with visits to Florence, Siena, Pisa and Lucca by train. This is a flexible vacation package. Select your number of nights in each city, desired hotel and activities.;
Included:
6 nights from $957*

Close more details
Fly in to Pisa International airport, pick up your car and enjoy a stay in the Coast of Tuscany.;
Included:
6 nights from $897*

Beautiful Tuscany
9 nights from $1,193*
Focus your visit to Italy in wonderful Tuscany! Visit artistic Florence, then pick up your car and spend some leisurely days staying in Lucca, San Gimignano and Siena to be able to experience all the different aspects of this charming region. This is a flexible vacation package. Select your number of nights in each city, desired hotel and activities.
Included:

Rome - Siena - Pisa - Florence - Assisi - Rome by Train
9 nights from $1,113*
Visit Italy in style with a multi-city vacation package. Combine Imperial Rome (with centuries of art, history and tradition), beautiful Siena, Pisa (see the famous leaning tower), artistic Florence, Assisi and back to Rome with the TRN train. This is a flexible vacation package. Select your number of nights in each city, desired hotel and activities.
Included:
Customer feedback (11)

Tuscan Adventure
7 nights from $1,226*
Start with a visit to artistic Florence, then pick up your car for a visit to the Spa city of Montecatini Terme and the rennaisance city Lucca.
Included:
Customer feedback (5)

Tuscan Journey
10 nights from $1,361*
Explore beautiful Italy with this leisurely, flexible vacation package in Europe! Enjoy a visit to Pisa (famous for its Leaning Tower), the medieval hilltowns of San Gimignano and Siena, proceed to artistic Florence (an art lovers dream; featuring the iconic statue of David, the stunning Birth of Venus; fabulous architecture and bustling outdoor markets) with your rental car. In Florence, you leave your car and catch the train for a stay in Imperial Rome (truly Italy`s treasure; rich in history, full of modern amenities and home to the catholic faith). This is a flexible vacation package. Select your number of nights in each city, rental car, desired hotel and activities.
Included:
Customer feedback (5)

From Venice to Rome via Tuscany plus Amalfi Coast
11 nights from $1,009*
Sample all that Italy has to offer from north to south, take your vacation into your own hands with the convenience of a rental car! Start off with a visit to beautiful Venice (charming canals, gorgeous palaces). Then pick up your car for a drive to Pisa (famous for its leaning Tower); continue to artistic Florence (home to the statue of David, and the famous Birth of Venus). Afterwards visit mystical Assisi, then drive down to charming Sorrento and finally visit Imperial Rome(the Vatican, centuries of artistic achievement).This is a flexible vacation package. Select your number of nights in each city, desired hotel and activities.
Included:
Customer feedback (44)

Rome - Siena - Pisa - Florence - Verona - Venice by Train
9 nights from $1,142*
Italy has a longstanding tradition as a center of culture and art! Many great painters, sculptors, musicians, inventors, explorers and architects have come from or studied in various cities across Italy. These same brilliant visionaries have left a trail of art across the country that is beautiful and inspiring. With this vacation package visit Rome (a treasure trove of art, manuscripts and architecture), Siena, Pisa (with its famous leaning tower), Florence (the epicenter of Italian art; see the David by Michelangelo, The Birth of Venus by Botticelli and the beautiful La Velata by Raphael), Verona and Venice by rail. See the stunning museums, churches, bridges, churches and other sights that put these cities on the map! This is a flexible vacation package. Select your number of nights in each city, desired hotel and activities.
Included:
Customer feedback (5)

Rome - Tuscany - The Veneto - Lake Como - Milan by Train
13 nights from $1,306*
Sample Italy with this unique, customizable vacation package! Travel by train between all the best cities; Begin in Imperial Rome (the treasure of Italy; centuries of artistic achievement, rich religious history and sublime food), Siena (a distinctively medieval atmosphere, time has stood still in this quaint city), Pisa (famous for its Leaning Tower), Florence (an art lovers dream! See works by Raphael, Michelangelo and Botticelli), Verona (a charming Renaissance city, famous as home to star-crossed lovers Romeo and Juliet), Venice (romance and magic flow through this canal city), Lake Como (Italy`s most famous lake and home to international celebrities) and Milan (a world fashion capital). This is a flexible vacation package. Select your number of nights in each city, desired hotel and activities.
Included:
Customer feedback (2)

Tuscany - Pisa
6 nights from $802*
Base yourself in Pisa with a rent a car for exploring the area on your own.
Included:
Customer feedback (1)

OR
Loading...Please wait
Feedback from our travelers
4.7 out of 5 stars

Very enjoyable trip. Everything as described.