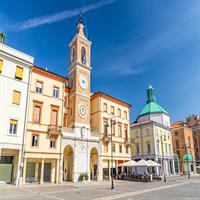 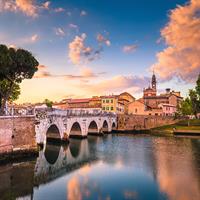 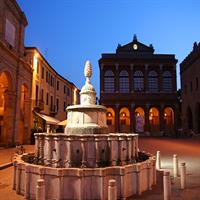 From sun, sea and sand to clubs, parties and theme-parks to history, style and serenity, Rimini offers every pleasure. This coastal town is located in Italy`s Emilia-Romagna region and presents itself as a place like no other with the consuming and infectious Italian passion for life, which radiates from all corners of this enchanting city.

Combine Bologna (a thriving university town and architectural gem), Rimini (Adriatic coast, in Italy’s Emilia-Romagna region), Ravenna (former capital of the Western Roman Empire, the Visigoth Empire, and the Byzantine Empire, but best known today for the Byzantine mosaic decoration of its churches and tombs), Ferrara (known for the buildings erected by its Renaissance rulers, the Este family) and Venice (built on more than 100 small islands in a lagoon in the Adriatic Sea. It has no roads, just canals, lined with Renaissance and Gothic palaces) with train between cities. This is a flexible vacation package. Select your number of nights in each city, desired hotel and activities.

Unforgettable vacation experience! Fly into the marvelous city of Milan (a fashion and shopping capital). Combine this amazing experience with Parma (Romanesque buildings, including the frescoed Parma Cathedral and the pink marble Baptistery, grace the city center). Then the trips continue into the fascinating cities of Modena (known for its balsamic vinegar and opera heritage, plus Ferrari and Lamborghini sports cars), Rimini (Adriatic coast, in Italy’s Emilia-Romagna region), Ravenna (former capital of the Western Roman Empire, the Visigoth Empire, and the Byzantine Empire, but best known today for the Byzantine mosaic decoration of its churches and tombs) and Ferrara (known for the buildings erected by its Renaissance rulers, the Este family) with train between cities. Last but not least is the stunning city of Bologna (a thriving university town and architectural gem). This is a flexible vacation package. Select your number of nights in each city, desired hotel and activities.