These packages are perennial favorites. They save us valuable research time and give us a sense of what travelers like us enjoyed in the past.
Best of Europe by Train

If you haven't done it already, you have to travel by train in Europe. It should even be on your 'things-to-do-before-I-die' list!
Best Self-Drives

Europe is famous for its vast railroad network, but driving around in a rental still represents the best way to see some of the old continent's most picturesque regions.
Party Capitals

Whatever your idea of a good party is, you will find it in Europe, if you know where to look!
Cities in Italy
Rome 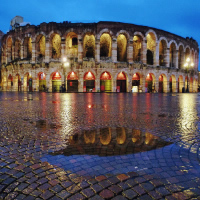 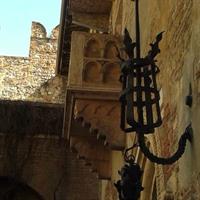 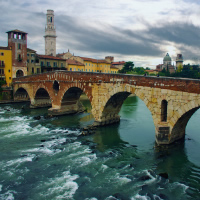 The city of Verona in the province of Veneto, Northern Italy, rivals Venice in terms of magic and romance. Visitors turn here in numbers, making this town the most visited of the province after Venice. Aside from Romeo and Juliet's strong pull, Verona is a charming medieval and Renaissance city, with numerous medieval palazzi, churches, towers, and centuries-old piazzas. Among other objectives of interest are the Roman amphitheatre (the third largest in Italy), Arco dei Gavi, Basilica of San Zeno.

More details
A perfect introduction to 3 fascinating Italian cities! This vacation package to Europe begins in Florence (Michelangelo`s David, Botticelli`s Birth of Venus, and Raphael`s La Velata) and continues through Verona (magic and romance; a medieval city with churches, towers and piazzas) and finally Venice (Sumptuous palaces and romantic waterways). Travel between these cities by very convenient train rides which allow you an opportunity to observe the lovely country side. This is a flexible vacation package. Select your number of nights in each city, desired hotel and activities.;
Included:
6 nights from $940*

Close more details
A fantastic chance to visit the highlights of Italy, in this self-drive vacation package! Begin with a stay in Imperial Rome, then drive to sunny Siena, artistic Florence, the often overlooked gem Bologna, fashion-forward Milan, Verona which rivals Venice in magic and romance, picturesque Padova (Padua) and charming Venice. Drive to each destination with a rent a car to take ultimate control of your vacation. This is a flexible vacation package. Select your number of nights in each city, desired hotel and activities.;
Included:
12 nights from $1,144*

Close more details
Combine< strong>Milan (a fashion and shopping capital), Lake Como(a favorite destination for celebrities; Italy`s most famous lake), Verona (magic and romance; a medieval city with churches, towers and piazzas), Bolzano (in the South Tyrol province of north Italy, set in a valley amid hilly vineyards) and Venice (the romantic city set on canals) with the TRN Train. This is a flexible vacation package. Select your number of nights in each city, desired hotel and activities.;
Included:
10 nights from $1,328*

Rome - Siena - Pisa - Florence - Verona - Venice by Train
9 nights from $1,142*
Italy has a longstanding tradition as a center of culture and art! Many great painters, sculptors, musicians, inventors, explorers and architects have come from or studied in various cities across Italy. These same brilliant visionaries have left a trail of art across the country that is beautiful and inspiring. With this vacation package visit Rome (a treasure trove of art, manuscripts and architecture), Siena, Pisa (with its famous leaning tower), Florence (the epicenter of Italian art; see the David by Michelangelo, The Birth of Venus by Botticelli and the beautiful La Velata by Raphael), Verona and Venice by rail. See the stunning museums, churches, bridges, churches and other sights that put these cities on the map! This is a flexible vacation package. Select your number of nights in each city, desired hotel and activities.
Included:
Customer feedback (5)

Rome - Tuscany - The Veneto - Lake Como - Milan by Train
13 nights from $1,306*
Sample Italy with this unique, customizable vacation package! Travel by train between all the best cities; Begin in Imperial Rome (the treasure of Italy; centuries of artistic achievement, rich religious history and sublime food), Siena (a distinctively medieval atmosphere, time has stood still in this quaint city), Pisa (famous for its Leaning Tower), Florence (an art lovers dream! See works by Raphael, Michelangelo and Botticelli), Verona (a charming Renaissance city, famous as home to star-crossed lovers Romeo and Juliet), Venice (romance and magic flow through this canal city), Lake Como (Italy`s most famous lake and home to international celebrities) and Milan (a world fashion capital). This is a flexible vacation package. Select your number of nights in each city, desired hotel and activities.
Included:
Customer feedback (2)

OR
Loading...Please wait
Feedback from our travelers
4.7 out of 5 stars

Nancy D ...
Read more - See this traveler's itinerary
Traveled on: 4/22/2019 12:00:00 AM
Everything went extremely smoothly. The hotels were all great. Our hotel in Roma was smaller than the average hotel; however, it was nice.